Background Information
The Pueblo thought Kachinas were ancestral spirits who returned with the clouds and rain to help their people. Over 300 different Kachinas were believed to exist. Pueblo Indians believed that these spirits once lived among the people, but they became offended when not enough attention was paid to them. Before leaving the Kachinas taught their people to dance. Pueblo held religious festivals and ceremonies in which they asked the Kachinas to bring rain and make their crops grow. They used drums and rattles in the dances during the ceremonies. They often danced in masks and chanted. When a boy turned 13, he was invited to the kiva where the identity of the Kachinas was revealed to him. Girls were not brought to the kiva, but they were also told the secret of the Kachina.

Directions for a Wooden Spool Doll
For each doll purchase:

Background Information
Around 1600 the Navajo women began to spin and weave wool. The sheep belonged to the women and the horses belonged to the men. The women sheared the sheep. Navajo women learned from the Pueblo how to weave. The early rugs they made were usually striped straight across. Later the women learned to weave a stripe on a slant and to make a diamond shaped design. The first rugs the Navajo made were dyed with leaves, berries, and insects. The frame of the loom was made of four long poles and set up outdoors except in the winter. The rug or blanket was never wholly completed or perfect because the Navajos believed it would offend the spirits.

Background Information
Sand paintings were constructed on the floor of the hogan by sifting various powdered herbs, sand, and other powdery material. The sick person was given a special herb to drink and told to sit in the center of the dry painting. The shaman touched the head of the figure then touched the patient’s head and chanted. This was repeated with each part of the body. The sand painting was removed before sundown and buried beneath trees that stood to the north, south, east, and west of the hogan. If the patient died his/her body was taken out a new door broken through the north side of the hogan and the hogan was burned.

Background Information
The Apache women packed all their possession each time they traveled to a new home in baskets. The baskets could hold heavy loads. They hung the baskets across their back and shoulders. The baskets were made from different plants, reeds, and herbs. The Apache mainly used yucca leaves, willow reeds, or juniper bark. Flowers from plants were used to make dyes for painting designs on the baskets. They Apaches used the coiling and twining technique.

Have students make a simple coiled basket. (Note this project takes about 7 to 8 hours to finish. Students may get started in class, then finish at home, or they may work on the project during story time over several weeks.)

The Navajo started working with silver in the late 1800's. First they hammered Spanish and Mexican coins into silver buttons. The buttons were cut from the clothing and used as money. After the Treaty of 1868 the Navajo were given specialized tools for silver smiting. The silver was later made into jewelry with turquoise stones. Have students string turquoise and silver colored beads onto wire to have the have a necklace similar to the one above.

These were made from plastic butter tubs. After adding dried beans to the bowl a piece of poster board was taped to the top. A turtle shell design was drawn onto the plastic tub (bowl) with a black permanent marker, then painted with acrylic paints so it would resemble a turtle shell. A piece of felt was taped to the cardboard so that the rattles could be tied onto the student's legs for a "snake dance".

Click the images to go to the individual Native American craft pages. 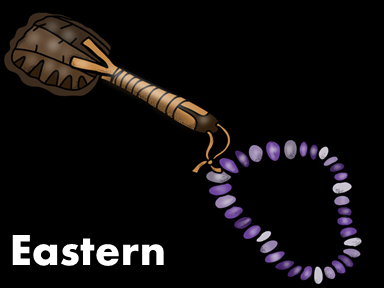 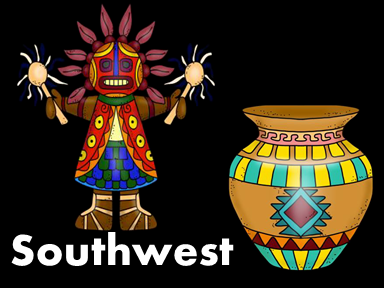 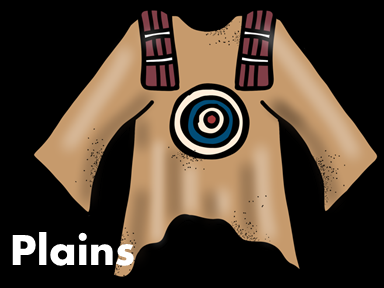 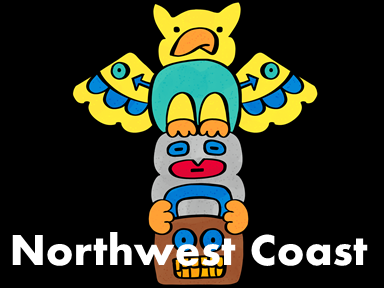 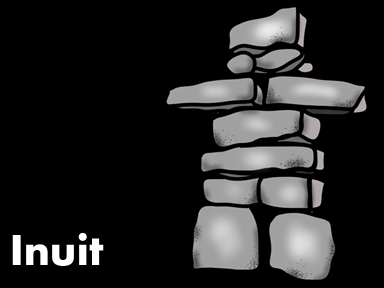 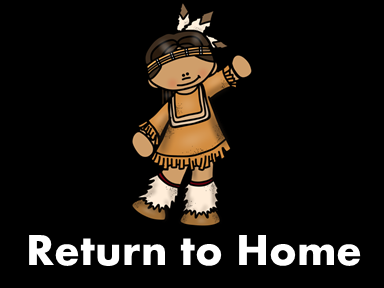