Alan Gratz is at his best when he writes historical fiction. Prisoner B-3087 is no exception. The novel is a rare treat!

Ten-year-old Yanek entertains his family with an after-dinner light show when the Germans invade his hometown of Kraków, Poland. Days later a wall is built forming the Jewish ghetto. After this, a series of rules changes Yanek’s life. No school for Jews. – His father’s business is taken. – Food is rationed. – A curfew is set. – Germans deport Jews to concentration camps and the Jewish ghetto. Yanek’s family must share their apartment with three other families. Yanek must work in a tailor’s shop.

When Yanek turns 13, he and his father sneak out to an abandoned building to give Yanek a secret bar mitzvah ceremony. Soon afterward, Yanek sees his parents being deported. Yanek decides to keep working at the tailor shop in hopes of not being deported. This, however, is the very reason he is taken. Germans want tailors at the concentration camp. Yanek lives through ten concentration camps and two death marches over the next three years.

If you would like to try out the Prisoner B-3087 Book Unit, this download contains free samples for Chapters 1-2.

Watch the book trailer. This makes a great hook activity for the novel.

The Holocaust Encyclopedia provides a whole series of videos in a section titled Animated Maps. This six-minute video titled World War II and the Holocaust gives a great overview of the Holocaust.

Prisoner B-3087 is a fictional book based on the life of Jack Gruener. Because the book is based on a real person, some of the other characters in the story were based on real people as well. Have students do a little reach to find out about these characters/real people.

An estimated eleven million people were killed during the Holocaust. Hitler’s plan was to eliminate any population of people he felt was inferior.

Read more books that center around the Holocaust. 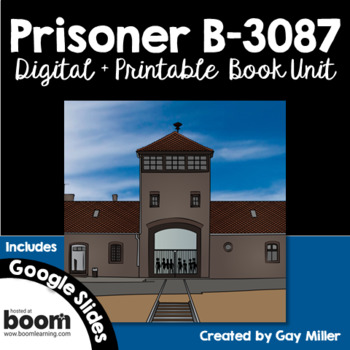 Permanent link to this article: https://bookunitsteacher.com/wp/?p=6125